Where Are The Losers?

Over the weekend, Left Foot Forward released a critique of the Lib Dem plan to give taxpayers a £700 income tax cut by raising the personal allowance to £10,000.

Here is the chart they used to demonstrate the allegedly regressive impact of the tax cut: 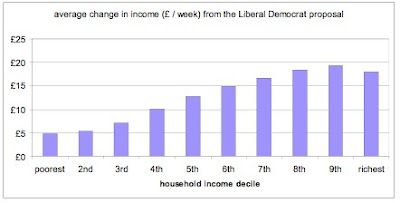 However, this chart can't be telling the full story. The Lib Dems have always made it clear that the policy is revenue neutral. This means that the policy won't cost the Treasury anything, because the tax cut has been paid for by tax rises in other areas: raising the tax on capital gains, and the new mansion tax on property worth over £2,000,000.

With any revenue-neutral tax change there will be winners and losers. However, the chart above shows everybody winning.

I suspect that the bars are showing the median of each decile, rather than the mean. This would hide the impact on the richest 5% of households. However since their report does not show how they calculated the impact, I can only guess.

Perhaps Left Foot Forward could come clean on how they have managed to hide the losers in the Lib Dem's tax plans.

Simple answer, they've only charted the tax cut, and not the tax increases. Ingenious, no?

That would do it!

But still, their methodology for producing this outcome is opaque to say the least.

Ingenious? I'd opt for disingenuous.

In the text, they suggest that if the tax rises were charted they would all fall on the top decile and throw its gains into reverse. Could be true. But the tax rises include aviation taxes so I'm not sure they would all fall in the top decile given that the mid-point of this graph is presumably £30k (being the average household income I think) and households earning £30k might well still fly once a year. It's more likely, I would think, that the top decile would be reversed and the next couple either reduced or reversed.

But yeah, without knowing how they've translated individuals into households in the first place, we can't amend their graph.